Force: Natural Enemy of the Horse

The use of force to get what you want is a paradox. You may initially get what you want. However, you will most often get any number of other things you don’t want. Although it can bring momentary desired results, force always leaves a backlash of deeply counterproductive side effects. This is true whether it’s used with humans or with horses.

For many horse people, there has often and unfortunately seemed to be no viable alternative. For years, I have heard heartfelt confessions such as:

Or “I watched my teacher/trainer ____ the horse to get him to do what they wanted. Since I’m not a professional, I assumed they knew what they were doing. I hated the way it looked. Something inside me felt there had to be another way without using force. I wished I knew what it was.”

In fact, there has been another way for thousands of years but only in the last 50 has it begun to gain noticeable recognition. That way is referred to as Natural Horsemanship. It replaces force with communication, psychology, and compassion. It’s the same method horses have always used to get what they want from each other. It’s natural for them. If you asked them they would simply call it leadership.

When a human wants something, they usually begin by asking for what they want. If they don’t get it, they can become impatient, frustrated, or angry. This often leads them to use some form of force and/or intimidation (mental, emotional, or physical) to get what they want. This is called being aggressive. They do this with other people. They do it with horses.

When a horse is not getting his way he dominates either the other horse or his human. He does not use force or intimidation. He does something that will cause the other to become uncomfortable such as pin his ears, turn his butt, or lift his leg. The implication is: “if you don’t comply with my request, I will continue and cause you even more discomfort.” 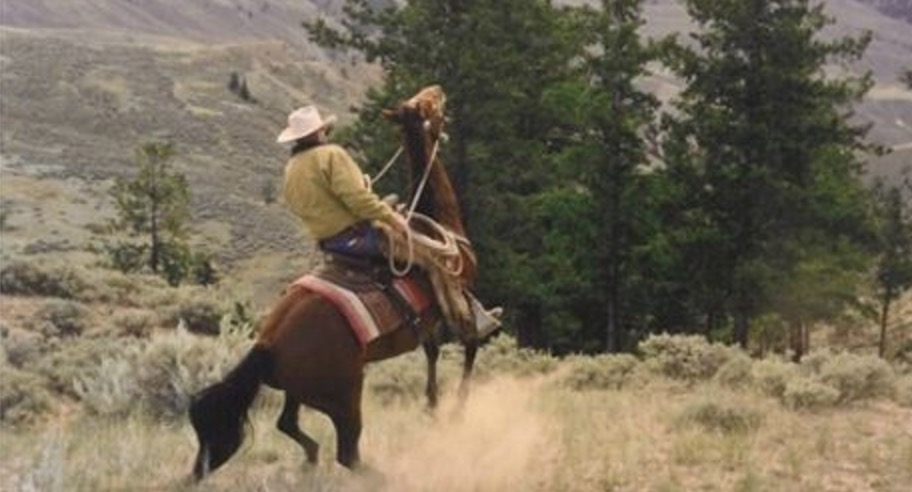 At this point, because more discomfort usually implies a bite or a kick, the other horse or human respectfully complies. This is called being assertive. Being assertive commands respect. Being aggressive creates fear. Force is aggressive.

The natural home for a horse (prey animal) is living with other horses outside on open land with endless places to run. Living outside enables horses to flee from and outrun its enemies. The natural home for a human (predator) is indoors in a house (barn), an apartment (stall) or, thousands of years ago, a cave (horse trailer).

The first time horses are asked to enter the human world of barns, stalls, and horse trailers, they need to be taught with compassion and great patience to feel safe and comfortable. If they become naturally apprehensive, resistance is the only way they know how to tell us: “Hey, this is scary, it feels uncomfortable, so please don’t force me to do this.”

If we look at this from the horse’s point of view, unless he feels 100% safe, he never wants to be in a situation where he cannot escape to save his life. Horses know that it’s not healthy to be trapped by a predator. They know that only predators use force. For a horse, force feels like being trapped. Being trapped is what happens to a horse just before he’s eaten.

If you force a horse to comply, especially if he’s not confident or feeling safe, he will use everything in his power to escape from the source of the force (e.g. you!). He will do this whether you are using force on the ground or on his back. The more force, the more resistance, and the more possibility of injury to both human and horse.

No one likes to be forced to do anything. When I was a kid and I didn’t practice my trumpet, my father would get mad and yell at me to practice. He was big, scary, and intimidating, but I was never afraid he was going to eat me. When a human gets to the point of using force with their horse, they’ve often become frustrated, annoyed, or angry. Horses are hardwired to immediately read these emotions as predatory and, therefore, as a potentially life-threatening situation.

What may start out as annoying resistance from your horse can frighteningly escalate if the use of force increases. The horse will not only resist out of fear, he will defend himself at all costs: bucking, biting, rearing, kicking, or running away at top speed.

Natural Horsemanship teaches humans to look at their relationship with their horse from the horse’s point of view (compassion). To see it like a horse, we have to learn and know how and what horses think (psychology). We have to learn how to tell our horse that we understand his point of view, know why he feels that way, and ask him for what we want in a way that feels comfortable to him (communication). We need to become our horse’s leader.

Most horses, like most people, are good, kind at heart, and capable of making profound changes in themselves. Riding horses is not natural, otherwise we’d see horses riding other horses. For a horse to learn to feel safe with a human predator on his back requires a relationship built on mutual love, trust, and respect. This can only be achieved with communication. It cannot be achieved by force.

Once we all honor each other’s true nature, embrace it, and work together, force becomes a tool of the past replaced by love, understanding, and communication. This is the foundation for all positive relationships—prey and predator, human and horse.

“To force a horse when it does not understand is like training a dancer by whipping and spurring” — The Art Of Horsemanship by Xenophon – Greek General – 365B.C.

Tim Hayes is the author of RIDING HOME: The Power of Horses to Heal. It is this amazing power of horses to heal and teach us about ourselves that is accessible to everyone and found in the pages this book. Every book ordered will benefit veterans with PTSD, children with autism, and children of families in need. Learn more at ridinghome.com. For Tim’s clinics, private sessions, books, DVD’s and more articles go to Hayesisforhorses.com.