Risk of Injury on a Trailer May Be More Closely Tied to Owner’s Actions than Previously Thought, Finds Study

Good horse owners have always done their best to prevent problems that can arise during shipping. But what practices you employ may be more important than ever, finds a recent study.

“A Survey on Transport Management Practices Associated with Injuries and Health Problems in Horses,” published on the Public Library of Science online journal in September 2016, suggests that a horse’s risk of injury or illness may be even more closely tied to an owner’s actions than previously thought.

The study, which was conducted as an online survey, was used to determine associations between transport management and transport-related injuries and diseases in horses in Australia.

Equestrians from any sector of the equine industry were invited to take the survey if they had organized transport at least monthly over the past two years. Out of 987 responses, 797 met the inclusion criteria.

The survey included three sections: the respondents’ demographic information, transport management procedures before, during and after transport, and transport diseases experienced in the previous two-year period. Specifically, the study focused on the outcomes of traumatic injuries, diarrhea, heat stroke, muscular problems, laminitis, transport pneumonia and colic.

Traumatic injury was the most common transport-related problem, reported by 45% of respondents. Those under 40 years of age who cared for a large number of horses per week (more than 30) were the most likely to report these injuries, indicating that experience and vigilance may play a role in prevention. While the chance of traumatic injury decreased with the use of protection aids, such as shipping boots, perhaps surprisingly, it increased with the use of tranquilizers.

The study confirmed that, when it comes to equine health, prevention is key. Horses that were provided adequate hay and water prior to travel were less likely to suffer from heat stroke. Professional horsemen seem to already know this, as problems like diarrhea and heat stroke were reported more often by amateurs than by professionals.

Assessing the health of a horse before the journey and providing proper follow-up care after also proved significant. There was a greater prevalence of muscular problems in horses that were not properly examined before transport. What’s more, the risk of laminitis was three times greater in horses post-transport when recovery strategies were not applied.

When it comes to transport pneumonia, both the length of the journey and the horse’s activity level were contributing factors. The study found that a higher risk was associated with longer journeys and that more active horses, such as racehorses, are at significantly greater risk for transport pneumonia than recreational horses.

Finally, though 10.3% of respondents reported colic in their horses, no associations were seen between these incidents and the variables that were examined. Colic, as it often seems to be, remains a bit of a mystery.

While the authors of the study urge that it be “interpreted with caution,” since it relies on the memories of its participants, it is still a great reminder to horse owners everywhere that their own actions, big and small, can have a drastic impact on the health and well-being of their beloved horses, especially when it comes to trailering.

Travelling north after the winter circuit? Book with Equo and save! Download the App today to get the best deal. 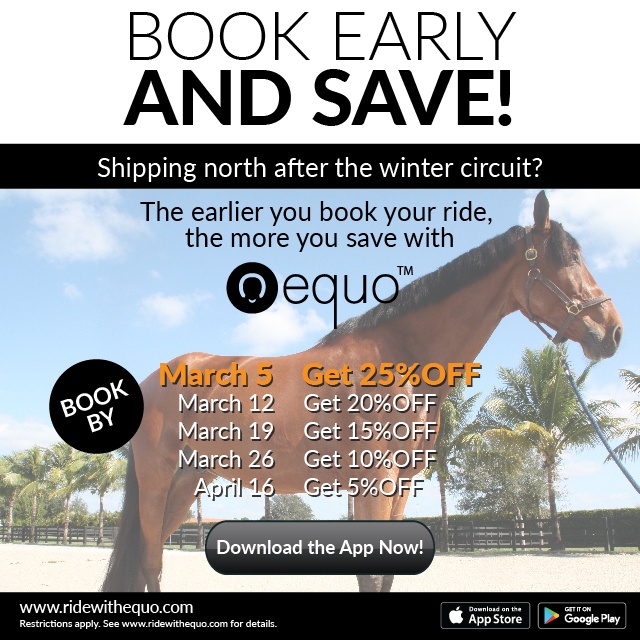